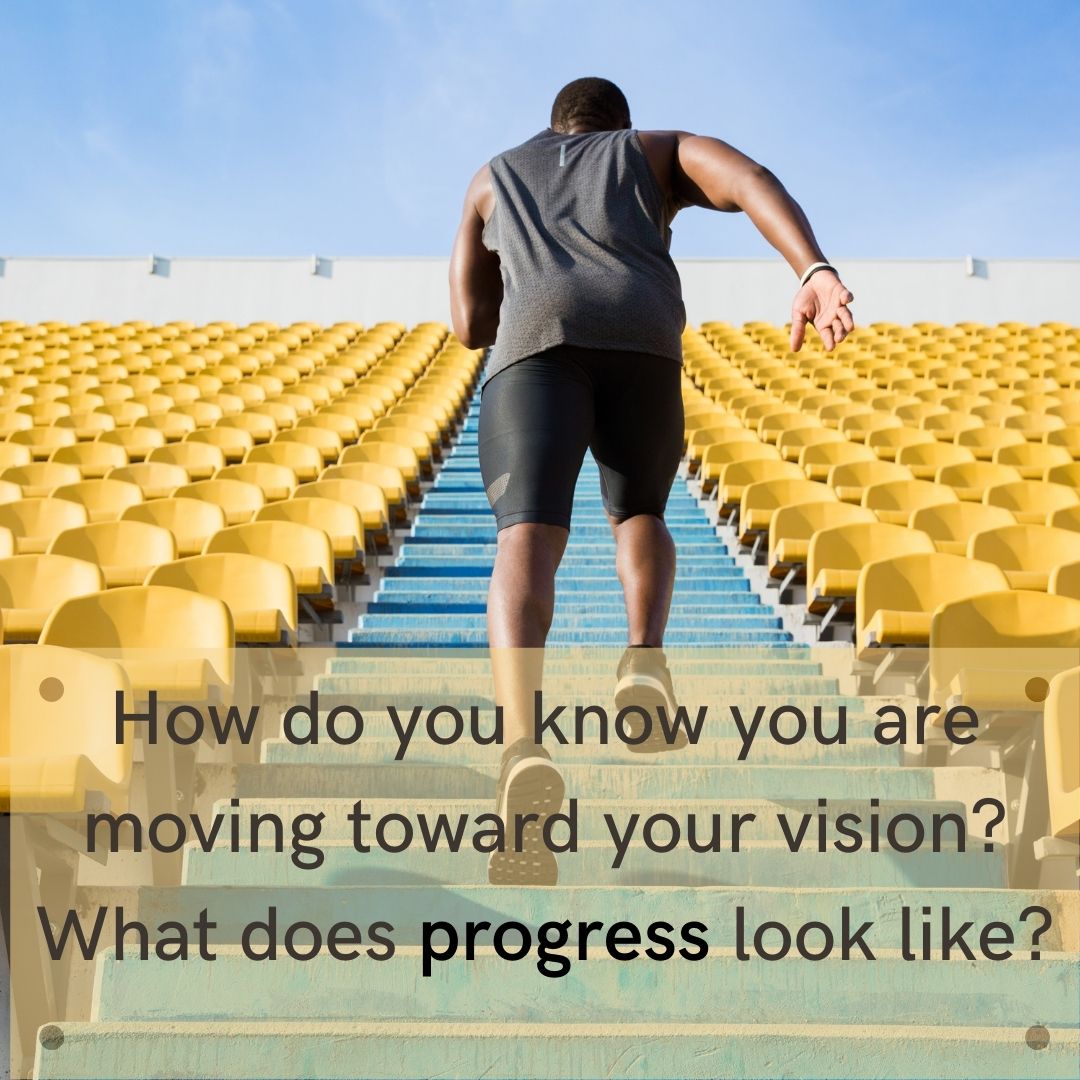 In Part 1 your one best next step was to consider a strategic objective or significant goal and envision the future after successfully achieving it. There’s more to do, in order to achieve it and especially when achieving it through others. So your next step is to define what progress will look like.

For a strategic objective or significant goal, meeting it within one quarter is rarely possible. But making progress within a quarter absolutely is possible! Backtrack from your vision of success to what progress toward that objective or goal might look. What will be different than “what is” today?

Defining progress (in a disharmonious environment)

The example I started in Part I was of a government organization with a large legal department. For this client, what success looked like was a legal department working in better harmony with key internal and external offices, to deliver results on five on-going cases that were important to the organization, and significantly reduce the backlog of internal legal matters related to other government departments and the community.

When defining what progress would look like over the next several quarters, we had to do some high-level discovery (a best guess, with some input from team managers at the board and leadership levels) and then prioritize. It worked fairly well since the issue had been present for at least six years! For this client final definition of what progress looks like and prioritization of what matters most included a vote.

In the first quarter, there were three supporting steps that needed to be addressed. These steps included hiring a new legal director, reviewing the department for promotions and wage adjustments to ensure retention of attorneys and staff, and gaining a majority vote (and full commitment) of all board members and leadership.

While it may seem that the objectives are redundant, this was intentional. Since we knew that measuring progress was an important step, we made sure to lay out these key progress (nearer term) objectives in a way that the right mix of people could be meaningfully asked for input and feedback.

Also in the case of this client, the objectives remained the same over six months rather than just one quarter. The first assessment of progress was performed at the end of the first three months. Those results were either “n/a” (not started) or “red” (no noticeable progress, mostly due to expected upheaval in the department by a manager who was laterally moved but not removed).

>> Even if you know the results won’t be great, it’s important to still assess, even if it is done by observation and asking questions rather than by formal survey.

By the end of six months, however, and after a more formal assessment and time with each team, progress was significant for the initiative I’m sharing in these posts. Every objective had progressed to “yellow” which in this case meant that improvements were noticeable, but attention was still needed.

>> It’s amazingly easy for people to fall back to old patterns when attention is shifted. It’s critical for leaders to continue communicating that the objectives are important; providing support, observing, asking questions, diligently measuring progress, and re-checking selected measures and even objectives to be sure that they are truly pointing in the direction of success. In Part 5 I’ll talk about measurement.

For your best next step, consider achieving the success you envisioned in Part I, and now ask, “What will progress look like?”