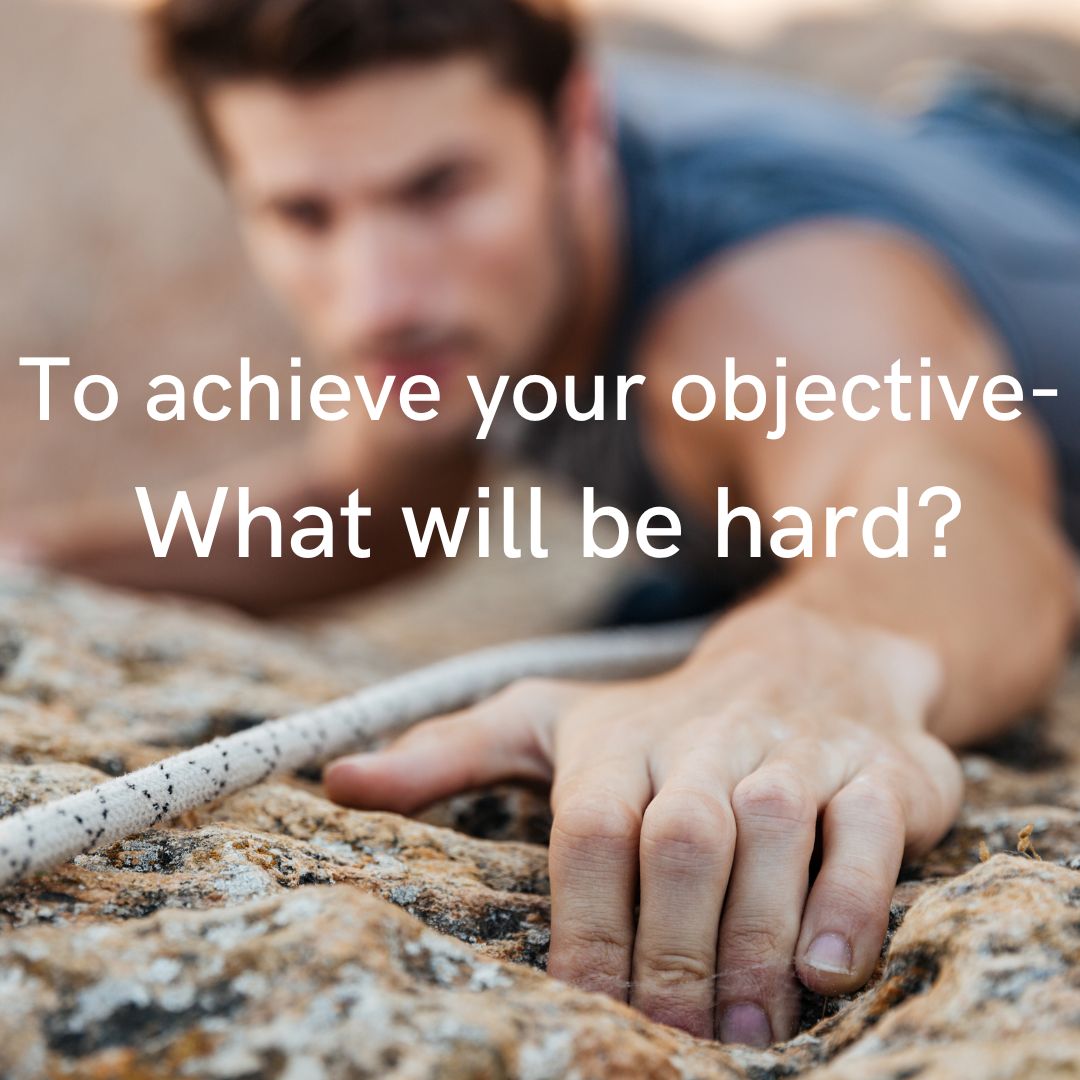 In Part 1 your one best next step was to consider a strategic objective or significant goal and envision the future after successfully achieving it.

In Part II your best next step was to define what progress would look like. I recommended doing this by prioritizing 1-4 nearer-term goals or objectives that would indicate you were moving in the right direction.

Now your step will be to consider: what will be hard? This requires looking into the future when you’ve achieved your longer-term strategic objective, or 1-4 nearer-term objectives or goals that indicate progress. And it requires getting clear about “what is,” now. What will likely hinder progress?

The example I started in Part I shared what success looked like for a client moving through a re-alignment to the organization’s mission and vision.

In Part II I shared the 4 Key (progress) Objectives they defined.

After defining what progress (toward achieving objectives) will look like, brainstorm all that will be hard. Then, prioritize that hard stuff to identify the top 3-6 biggest challenges to progress, and success.

We then addressed what would likely hinder progress, based on the current state of the workplace. We prioritized what will be hard. Here are the top 3:

The top two have to do with how people are being, rather than the skills or authority they hold.

The process of identifying what can be hard, is often hard to do. Because the soft stuff—how people are being—is hard to identify and address.

It’s also hard because we want change to be easy and fast. But we can’t change people. We must change the context, which may include how we are being as leaders, for a person to choose to change.

Early in this re-alignment, the existing Director was repositioned to a non-management role where her expertise and courtroom skills could shine. She wasn’t feeling so shiny about that, in part because advancement in position was the measure people relied on to feel valuable in this workplace.

Valuing advancement over achievement is common, and hard to shift—it takes time, strong leadership, and continuously communicating and modeling what is desired. The new Director and the former Director needed to be supported to help them truly shine in their roles.

In addition, not all 12 members of the Business Council (which is like a Board of Directors) agreed to how the legal office was to be re-organized, and there was not consensus on the priorities for that office.

For any re-alignment, change is required. And for a desired change to be successful, it is critical for leaders to commit to majority decisions, even if they were not in that majority.

Finally, the workplace itself could take a turn for the worse if continuous attention was not paid to how people were adjusting to the change in leadership and role changes. They also faced change in how this legal office interacted with other offices and departments in this 700+ organization, within the community they serve, and with the federal government where several cases were in progress.

How did this example client identify and prioritize what will be hard?

You may be wondering how they identified what would be hard, and how they went about prioritizing and taking action on those priorities. (As I mentioned in Part II that “By the end of six months, however, and after a more formal assessment and time with each team, progress was significant.”)

Without getting into too much detail specific to this particular organization: we started with policy, so that whatever was decided would stick. We had already identified some challenging scenarios during the initial parts of this process: defining what success, and then progress, would look like.

The HR leader and Chief of Staff understood more about the relationship networks in the legal office, and this is how we identified that changes in that office and the departments within it would be a challenge to progress.

We came up with about ten statements about what would be hard, grouped similar items, then one by one went through them with a statement “Is this one more important than the next one on the list? And the next, and the next?” And did this until we had the top 3 priorities in what would be hard.

Your best next step

For your best next step toward the progress you have in mind, write down all that will be hard to push through in order to realize progress, group them in a logical way, and prioritize.

Let me know the ideas or questions you have and the next step you take!