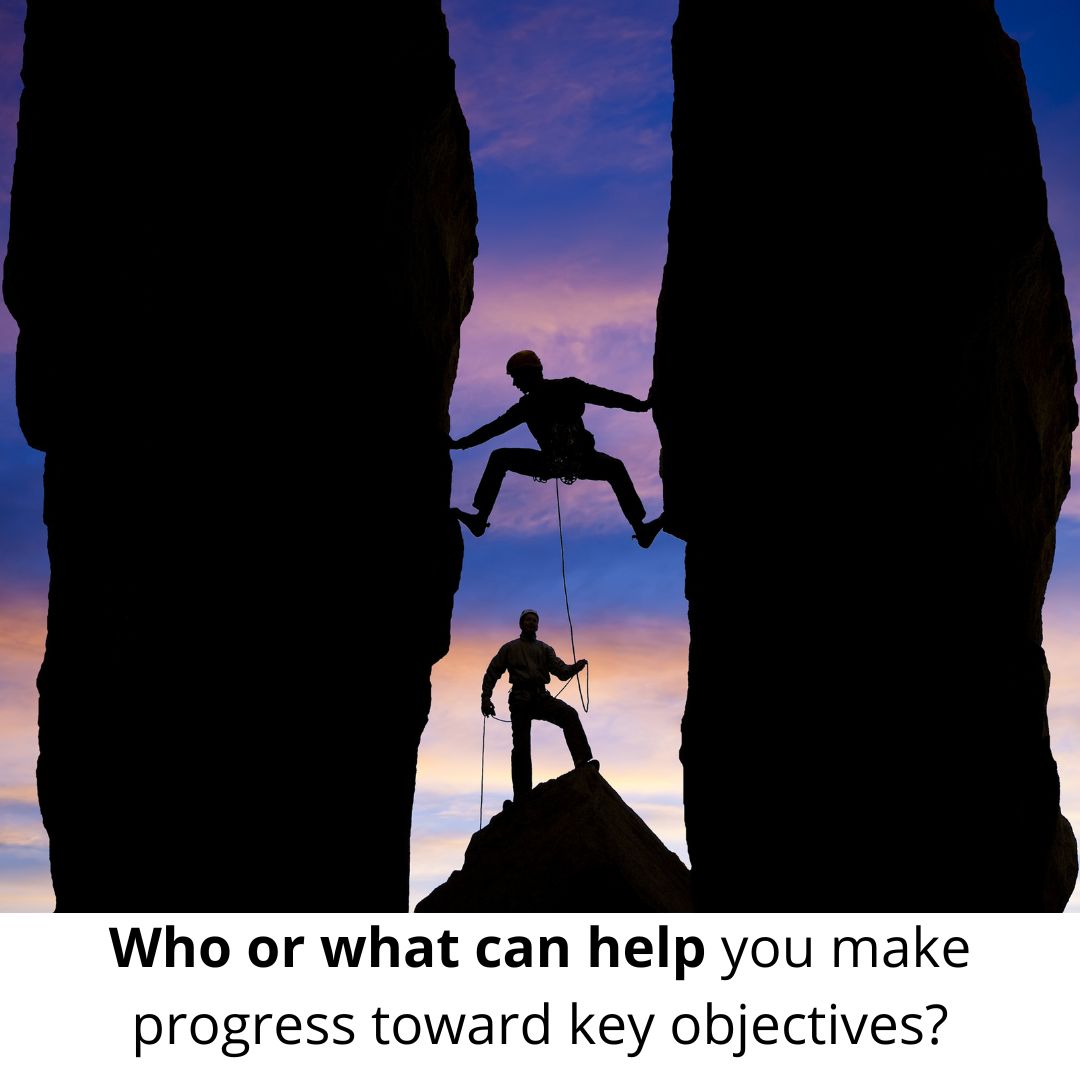 In Part 1, I asked you to consider a strategic objective or significant goal and envision the future after successfully achieving it.

In Part II, you defined what progress would look like by prioritizing 1-4 nearer-term goals or objectives that would indicate you were moving in the right direction.

And in Part III, you identified and prioritized what would be hard, asking “what will likely challenge progress toward achieving key objectives?”


When planning for change – Step 4: Ask, “who and what can help?” (to achieve progress toward our objectives)

Let’s revisit the 5 points introduced in Part I, now with point #4 highlighted:

The example I started in Part I shared what success looked like for a client moving through a re-alignment to the organization’s mission and vision. In Part II I shared the 4 Key (progress) Objectives they defined. And in Part III you can read not only what challenges this sample client identified, but also how you can identify and prioritize your own challenges.

As you read the steps above, in the form of questions, you may sense that each requires deeper and still deeper understanding of which roles will be most affected by the changes required in order to achieve key objectives, and the desires and behaviors of the people in those roles. You are correct!

In this step, you must reach beyond the leadership team, and get input from those who are closest to the work, workflow, and people that will likely need to change. In more command-and-control organizations, which this sample organization was, asking individuals for input—and help—is not typical. As such, it could have been quite hard. But even the most set-in-their-ways organizations can change.

An example of Step 4 in action

Luckily, the head of the Business Council (similar to a Board of Directors with internal leaders as members) desired that the entire organization change, not just the legal office that was addressed first. He fully supported the program that we recommended, and we gained majority support from Council. Our method included workplace assessments by relevant function and teams, individual one-on-one and 360-degree assessments, and coaching.

But first, we needed to identify what roles were most important to the changes needed, and who was in the roles and/or most significantly influenced those roles. In this case, those roles were in multiple offices and departments, the entire legal office, and most members of the Business Council.

From these, we were tasked (with the help of leaders on the Business Council) to discover and identify who would be most helpful (champions), who would be most resistant (detractors), and who would be neutral. Our final assessments, however, would be certain to reach all, and be de-identified so that we had the best chance of receiving truthful and complete responses.

That was how we addressed the “who” of Who/what can help? For “what” can help, we traced workflows, which in the case of this organization, had some policy addressing who could see what, how decisions were made, and the like. There were few if any documented procedures. There were no capital assets or technologies that would obviously help or hurt. Our most significant help (and hindrance) was going to come from people.

Your best next step

For your best next step toward the progress you have in mind to achieve objectives, identify who and what can help.